Digital-O-Mat: Compare your views on Internet policies with the parties for the German federal election 2017

Digital-O-Mat: Compare your views on Internet policies with the parties for the German federal election 2017

Although digital issues are becoming increasingly important, general election coverage often miss them out. That is why the "Koalition Freies Wissen" ("Free Knowledge Coalition") created the "Digital-O-Mat", an online tool for voter information for the German federal election of 2017. The FSFE asked the participating parties about their positions on Free Software. CDU/CSU, SPD and FDP avoid clear statements and thus confirm the status quo, the Greens and the Left in contrast present themselves as supporters of Free Software. 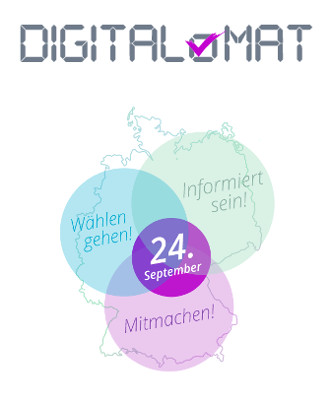 The Digital-O-Mat highlights the parties' positions on Internet policy relevant topics and helps voters to find their matching party for the election to the German parliament. Its design resembles the well-known Wahl-O-Mat, a popular online voter information tool by the German Federal Agency for Civic Education . Users of the Digital-O-Mat are able to answer twelve questions and then compare their position to the participating parties. The topics of Digital-O-Mat include transparency, surveillance, digital civil rights and, of course, Free Software. We asked AfD, Bündnis 90/Die Grünen, CDU/CSU, FDP, Die Linke and the SPD. We received replies from everyone except AfD. Digital-O-Mat is Free Software and had its debut in 2017 for the state parliament elections in North Rhine-Westphalia (Germany).

The parties' positions on Free Software

CDU/CSU (conservatives) and FDP (liberals) marked their position as "neutral" and answered in a very similar fashion. Unfortunately, these parties avoid making a clear stance and ultimately confirm the status quo. On one hand, they do consider the use of Free Software, on the other hand, so they say, there are multiple other aspects to consider weigh in. However, they list functionality and usability for example, even though they have no relation to the licence in use. When asked about the migration of existing IT systems, CDU/CSU prefer decision making on a case-by-case basis, while FDP dodged our question.

Although the SPD (labour) also marked their answer as "neutral", they support the deployment and development of Free Software in public administrations and educational institutions, "to foster the creation of innovative businesses in the local market". Die Linke (lefts) and Bündnis 90/Die Grünen (greens) position themselves as supporters of deployment and public funding of Free Software. The greens consider Free Software to be a "cornerstone for secure and future-proof IT systems", and the lefts also fully support it, as long as there are no concerns regarding security or operation.

About the "Koalition Freies Wissen"

The common goal of the Koalition Freies Wissen is to disseminate knowledge about digital and Internet policy issues as well as to highlight and establish digital civil rights in society and politics. The coalition has sent questions to the participating parties in previous state parliament elections this year and has now created the Digital-O-Mat for the German federal elections 2017.